His Highness, Crown Prince Sheikh Mishal Al-Ahmad Al-Jaber Al-Sabah received at Bayan Palace the new heads of diplomatic and consular missions, among them, Mr Abdullah Mohamed Almowed, newly appointed Ambassador of the State of Kuwait to the Republic of Azerbaijan.

His Highness, the Crown Prince, Sheikh Mishal Al-Ahmad Al-Jaber Al-Sabah gave a speech that said: “I am pleased at the outset to present to you, on behalf of His Highness, the Emir of the State, Sheikh Nawaf Al-Ahmad Al-Jaber Al-Sabah, my congratulations for choosing the honor of representing your country, Kuwait, in the countries accredited to it, which comes as a new breakthrough for Kuwaiti foreign policy, to be added to the record of Kuwaiti diplomatic achievements. Which, by the grace of God Almighty and thanks to the lofty directives of His Highness Sheikh Nawaf Al-Ahmad Al-Jaber Al-Sabah, the Emir of the country, in which Kuwait achieved a regional and international status, which reflected the confidence of the international community in us and in our diplomatic role, with the testimony of brothers and friends alike, that embodies the international credibility in our political approach and the integrity of our diplomatic work we gained We are keen to maintain a prestigious reputation and prestige and our gains in it.

Out of that concern, we have directed the Minister of Foreign Affairs to conduct the largest transfer of missions between heads of missions according to foundations and criteria in which we guarantee the continuity and vitality of Kuwaiti diplomacy.

Distinguished brothers, ambassadors, the new launch of Kuwaiti diplomacy comes in light of unprecedented crises, accelerating events, and regional and international conflicts, all of which have resulted in a new reality with which the world lives with conflicts and crises that have repercussions on us and on the international community. Your country is a trust that you have been entrusted with to secure the interests of your country and to distance it from the repercussions of hotbeds of tension and conflict sites.

Honorable brothers, ambassadors, the honor of representing His Highness the Amir, your country and the loyal Kuwaiti people is the highest national duty you have been entrusted with. His role in the regional and international environments, and there is no room for delay or inaction. The goals were set, the responsibilities were defined, and the channels were paved and worshiped for immediate implementation.

Distinguished brothers, ambassadors, the Kuwaiti missions play a major role in looking after the interests of Kuwaiti citizens and taking care of them in the countries they are accredited to. Maintaining his interests at the top of your concerns and responsibilities by providing them with full care and attention.

In conclusion, I wish you all success in performing your new duties in the service of our dear country, Kuwait, under the wise leadership of His Highness the Amir Sheikh Nawaf Al-Ahmad Al-Jaber Al-Sabah”.

The swearing-in ceremony was attended by senior state officials.

The ambassador received his credentials to present it to the President of the Republic of Azerbaijan. 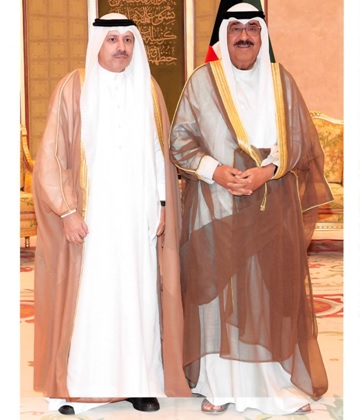